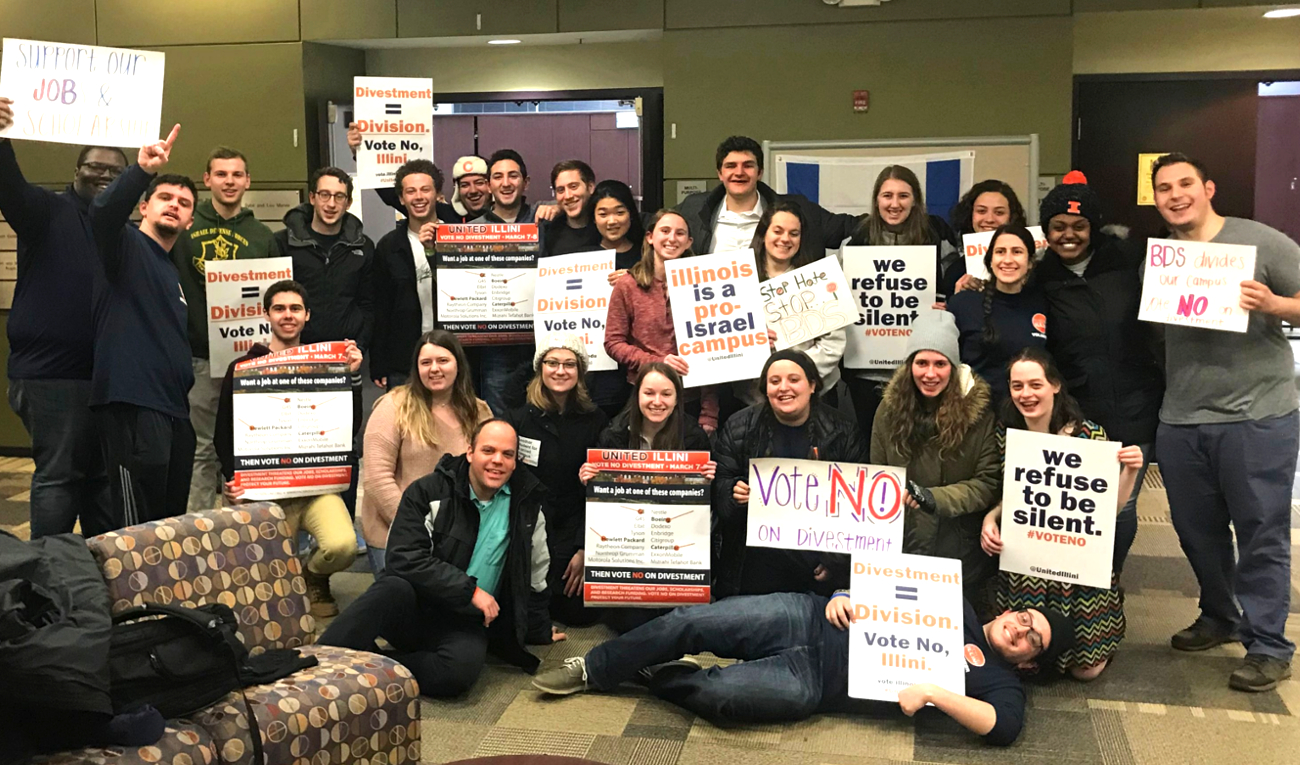 A referendum on the University of Illinois at Urbana-Champaign student ballot calling for divestment from companies that do business with Israel has been defeated for second year in a row. Students overwhelming rejected this question with 3133 “no” votes to 1700 “yes” votes.

Diverse student coalitions joined together under the umbrella of United Illini for a United Campus to campaign against the referendum. The campaign included over 100 students spending countless hours working over the last several weeks.

“Divestment would have signaled to both Jewish and non-Jewish students on this campus that their futures don’t matter and that the Israeli and Jewish communities here are unwelcome. That is not what this campus stands for,” said Sam Mostow a senior studying Economics.

This failed referendum threatened to divest from companies which provide students with jobs, scholarships, internships, and research opportunities. These companies include Caterpillar, Hewlett Packard, Boeing, and General Electric.

The referendum was also part of the international Boycott, Divestment and Sanctions (BDS) movement. BDS on campus is discriminatory against Jewish, Israeli and pro-Israel students. Students witnessed first-hand the connection between BDS and increased anti-Semitism. During the divestment vote last year, swastikas were found throughout campus and many students experienced anti-Semitic and racist incidents. This year, students reported facing harassment, intimidation, and even threats of physical violence.

“The BDS movement has meant divisiveness, anti-Semitism and intolerance for our campus. I am proud to say that our student body has overwhelming said no. And I am hoping that we can cast aside what divides us and work together on what unites us as students,” said Josh Mellody-Pizzato, a senior studying Political Science.

Many University of Illinois faculty and administrators added their voices against divestment. Seventeen professors signed onto an anti-BDS statement led by Professor Cary Nelson. Chancellor Robert Jones made a strong statement “in opposition to boycott of Israeli academic institutions.” Dean Brown of the Gies College of Business wrote a letter in The Daily Illini supporting our university’s relationship with Israel. The support of university leadership helped build morale among students.

United Illini for a United Campus says they now will work to prevent the threat of divestment from coming back to the University of Illinois at Urbana-Champaign campus.

Divestment was voted down for the second year in a row by a vote of 3133 (65%) NO votes to 1700 (35%) yes votes! We are proud of the work by every student who joined these efforts and will continue to work each day to ensure this campus is a safe environment for each and every member of the campus community. I-L-L! • • • #IlliniLoveIsrael #IlliniPAC #instagram_israel #ig_israel #israel_best #israelinstagram #insta_israel #travel #israel #ישראל #instagood #follow #like #photography #photo #love #college #Illini #UIUC #GoIllini #Champaign #Urbana #Illinois