Thank You UI President Killeen for Condemning BDS on Campus 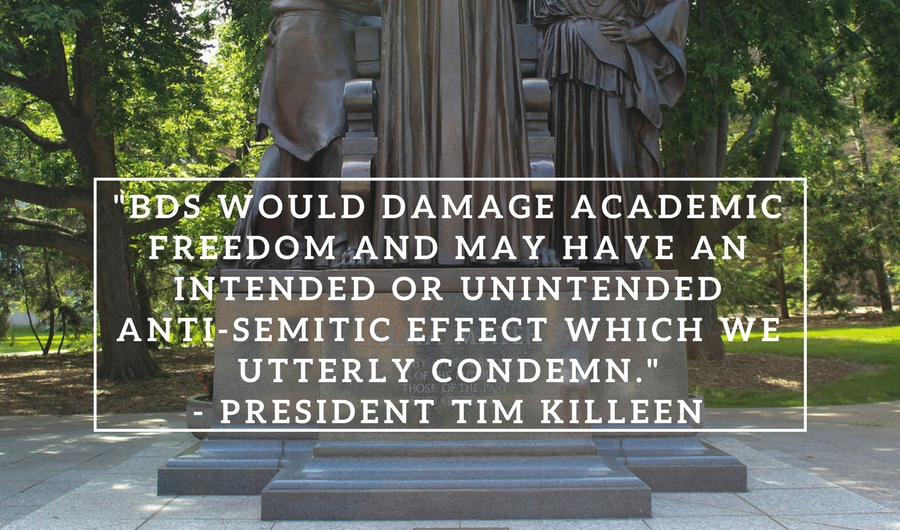 Dear Timothy Killeen, President of the University of Illinois:

My name is Shani Benezra. I am a senior at the Urbana-Champaign campus studying Broadcast Journalism. I am a Jewish, Israeli-American. I would like to sincerely thank you for your strong statement against the Boycott, Divestment, Sanctions (BDS) movement on campus.

Students have been asking the University of Illinois administration to stand up against anti-Semitism for a while now. I have experienced anti-Semitism on campus throughout my four years on campus. Your support gives us reassurance that this university is moving towards becoming a more inclusive campus for Jewish and Israeli students, and will not stand for anti-Semitism in any form. Your decision to speak up sends a strong message to the University of Illinois that discrimination will not be tolerated against anyone on campus.

Together with a coalition of other students, I have been working tirelessly for the past two years to defeat this hateful and divisive campaign. We know this fight is not over. Israel detractors on campus have vowed to continue bringing BDS to the University of Illinois each year. Their goal is to see it passed as a referendum and sent to the school administration. We will need your continued support to ensure that this hateful movement will never prevail on our campus. I hope you will continue to stand with our community then, like you are doing so bravely today.

BREAKING NEWS: "The University of Illinois System leadership stands in strong opposition to the Boycott, Divestment and…

BREAKING NEWS: "The University of Illinois System leadership stands in strong opposition to the Boycott, Divestment and Sanction (BDS) movement’s call for a boycott of Israel." Thank you! Read the full statement: https://t.co/jx3oCZhZDg pic.twitter.com/waDsoFo0FD

Read Next: Referendum to Divest from Israel Defeated Second Time at the University of Illinois