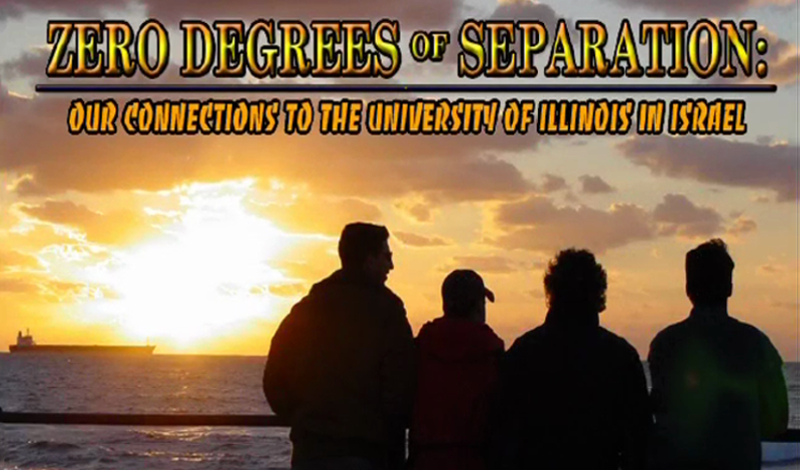 Immigrating to Israel – known as aliyah, from the Hebrew word for “ascension” – can be an uplifting but challenging experience. The documentary “Zero Degrees of Separation” tells the stories of University of Illinois alumni who have done just that.

The film examines the challenges of living in Israel and explores the reasons that so many Illini have moved there. It was made in 2003 during the Second Intifada, a period of violence that claimed over 4,000 Israeli and Palestinian lives. 46 alumni were interviewed.

Devora Goldenberg (LAS 2000), describes the difficulty of her first year living in Israel. She explains: “I don’t care if I have to have three different jobs – waiting tables at three restaurants, working at the bagel shop, babysitting, cleaning floors – I don’t care. I will not leave until the year is up.”

Robin Weisel-Capasouto (LAS 1969), talks about how immigrating after college changed the course of her life: “I always felt that if I had stayed in the United States I would have become a professional Jew. By coming to Israel, it kind of freed me from that. I was able to become a professional musician.”

Tal Brody (LAS 1965), of Illini Basketball and Maccabi Tel Aviv fame, turned down an NBA career to play professionally in Israel. Transitioning from Assembly Hall (now the State Farm Center) to an asphalt, outdoor court in Tel Aviv was a major adjustment. “Sometimes we would get rained out”, he says. “But because of our success they closed stadium [roof] and added an additional 5,000 seats.” Tal Brody’s journey exemplifies the stories of many other immigrants who struggle at first, but through hard work eventually find great success.

Stephanie Gordon (LAS 1998) shares a similar experience. She admits that living in Israel sometimes isn’t easy, but for her, it’s worth it. “The bottom line is, there is no other Jewish country. This is it. This is what we’ve got. You can send money, and you can plant trees. But the only way to fix the problems and the only way to really give this place a hope for the future – a hope for peace – is to be here,” she says.

Alan Potash, director of the film, says his goal was “to capture alumni living normal lives in Israel”. Three University of student also collaborated on the film: Foster Lewin, Josh Sandler, and Nimrod Sharon. Sandler says he joined the project “to show people in America what life is like in Israel from a point of view different from what is seen on the media.”

The film is also available for purchase on Amazon.